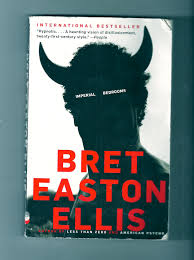 I am sure you all have watched American Psycho, and Bret Easton Ellis is the person we should all thank for such a master piece. Written with same satiric tones, Imperial Bedrooms will also play with your mind. Set in Hollywood, Clay is a current script writer who moves from New York to LA for the production of his new movie, and here is where everything gets complicated.

It is supposed to be a sort-of-continuation for Less Than Zero, although I skipped this prequel and went straight to the older Clay, but after reading Imperial Bedrooms I truly believe reading the first part would have helped me understand the character a bit better, which is not something easy to figure out through such an eccentric first person narrator.

From the beginning you can already tell it is going to be an intense story. Money, sex, drugs, you have all of those in this fiction, and it could not be any other way. The eccentricity of the work gives the plot and the character a tint of lunacy that will make you doubt throughout the whole thing.

The representation of the Hollywood society is what I loved the most. Bret Easton Ellis is a master in the art of “not saying anything but saying everything at the same time”. The background is explained by the actions of the characters themselves. Furthermore, the lack of punctuation marks and the overuse of the conjunction “and” will get you into the paranoiac of the situation, and the amok of the narrator’s mind.

If I had to choose one word to describe this work it would be chaos. If you can get easily offended and you dislike works with abundance of strange encounters and people that seem to be crazy, then you might want to skip this one, but I must say it is a sterling representation of the ostentatious life of Hollywood and the consequences of the greed for fame, and I do not regret reading it.

FranReads is a participant in the Amazon Services LLC Associates Program, an affiliate advertising program designed to provide a means for us to earn fees by linking to Amazon.com and affiliated sites.